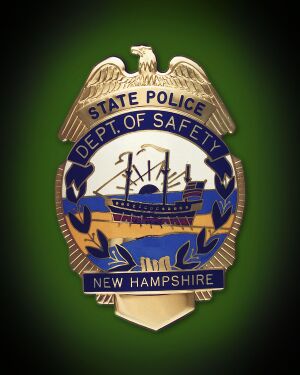 CANDIA- Mr. Stanley K. Richardson, Jr., 87, of Candia, passed away at the Catholic Medical Center on October 2, 2021 after a period of declining health.

Born in Concord, he was the son of the late Stanley K. Richardson, Sr. and Anne (Evans) Richardson.  He was raised and educated in Pembroke before later moving to Candia.  He enlisted in the United States Army and proudly served his country during the Korean Conflict, being honorably discharged with the rank of SP-3.

Prior to his retirement, Stan was employed by the NH State Police for over 30 years, rising to the rank of Corporal.  He later worked as a dispatcher for Merchant’s Motors.  He served as Assistant Chief for the Pembroke Police Department and also worked as a foreman for Pembroke Boats.

He enjoyed camping, stamp and coin-collecting, his autograph collection, fishing and NASCAR racing.  He was an avid Monarchs and Fisher Cats fan.

Stan is survived by his beloved wife of nearly 64 years, Laurice (Day) Richardson; his children, Kimberly Dionne of Bow, Susan Archambeault of Elkton, Maryland, Lisa Migneault of Candia and Stanley K. Richardson, III of Candia.  He was the brother to Sylvia Dockx of Venice, FL.  He is also survived by 4 grandchildren , 9 great grandchildren, a niece and nephew, and several cousins both here in the USA and in England.

To send flowers to the family or plant a tree in memory of Stanley K. Richardson, Jr., please visit our floral store.