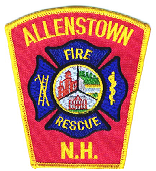 Born on May 26, 1931 in Manchester, he was the son of the late Leo Desrochers and Aurore (Morrissette) Desgranges.

Lippy attended the local schools and went on to served his country in the United States Navy from 1951 until his honorable discharge in 1954. He proudly served the Allenstown Fire Department and the Town from 1955 until 1977 in many positions from Radio Dispatcher, Lieutenant, Deputy Chief and as Chief for the last eight years. He was later employed in the hardware industry working for several years at both Aubuchon and Colonial until his retirement in 1993.

In his younger years, he enjoyed playing baseball and hockey. He dabbled in hunting, fishing, and was known for being an all-around Sports-fanatic. He was a member of the VFW Suncook Post, the Richelieu Club and an honorary life member of the Fr. Routhier Council #4666 Knights of Columbus.

Besides his parents, he was predeceased by his wife Florence (Coll) Desrochers in 2015.

He is survived by his son, Michael Desrochers and his wife Nathalie of Pembroke, daughter, Lynn Gagnon of Pembroke, sister, Lorraine Gosselin of Pinardville, grandchildren, Joslyn Devaney and her husband Michael, Taylor Gagnon and his wife Tanya and Ashley Desrochers, one great grandchild, Madelyn as well as nieces and nephews.

Calling hours will be held on Thursday, September 3, 2020 from 5 to 7 P.M. in the Petit-Roan Funeral Home, 167 Main St, Pembroke. A Mass of Christian Burial will be held on Friday, September 4, 2020 at 10 A.M. in St. John the Baptist Church in Allenstown.  In accordance with state and local guidelines, all attendees must wear a face covering and adhere to social distancing as directed in the funeral home and at church.  Interment with Military Honors will follow at St. John the Baptist Cemetery in Allenstown. In lieu of flowers, donations may be made in Lippy's memory to either the CRVNA30, Pillsbury Street, Concord, NH 03301 or to the American Heart Association, 2 Wall Street #104, Manchester, NH 03101. To share a memory or offer a condolence please visit www.petitroan.com

To send flowers to the family or plant a tree in memory of Leandre R. "Lippy" Desrochers, please visit our floral store.